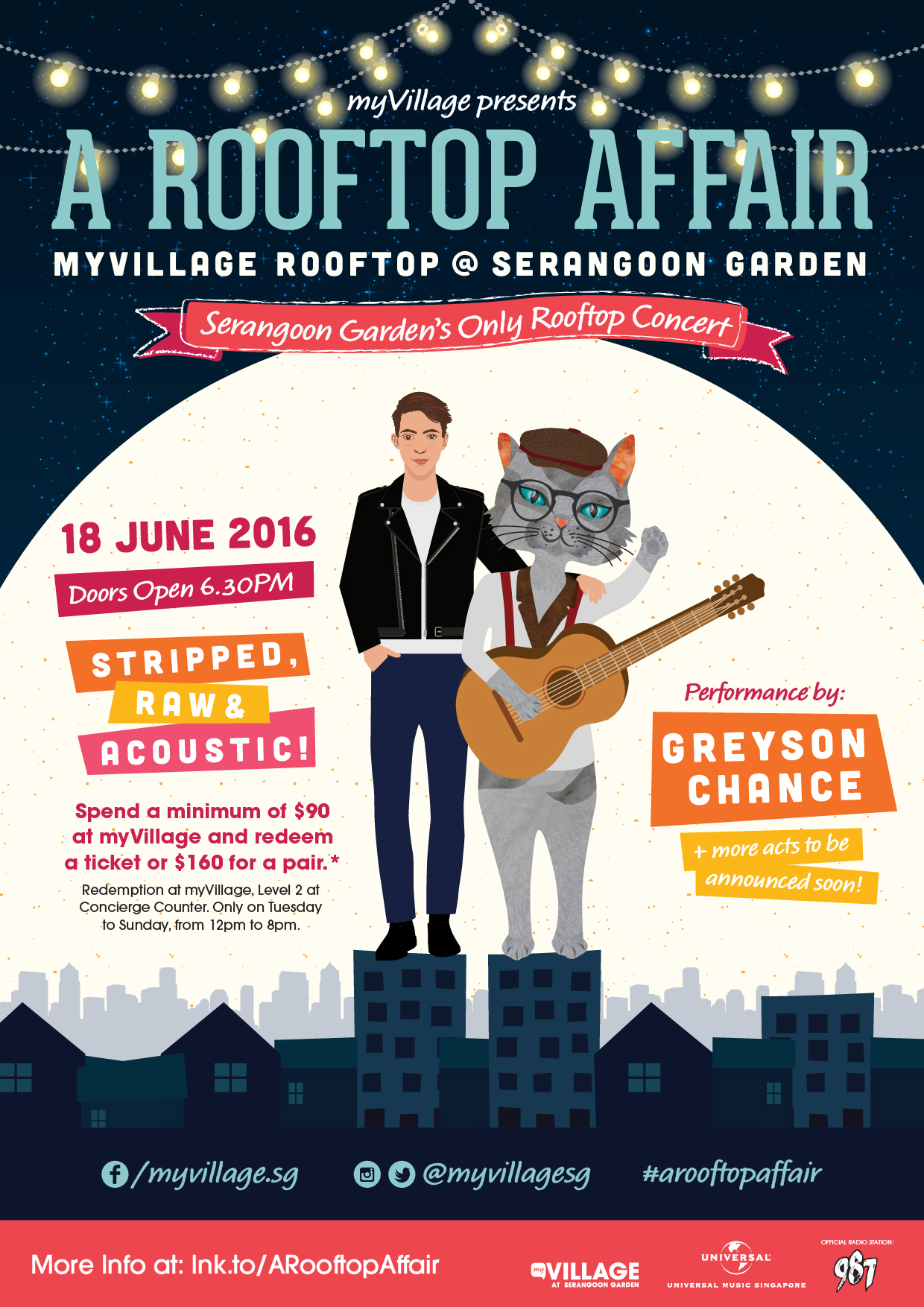 HEADLINED BY U.S. SINGER-SONGWRITER GREYSON CHANCE, WITH MORE ACTS TO BE ANNOUNCED SOON!

I’ve been working on this way before Filmhouse Festival ever happened, but it took me a while before I could actually tell you about it.

I’m pleased to announce the return of A Rooftop Affair – Serangoon Garden’s only rooftop concert experience on 18th June 2016, from 6.30pm at myVillage Rooftop at Level 3. This year, American singer-songwriter Greyson Chance is set to perform his new songs for fans in Singapore.

Greyson shot to fame in 2010 when his performance of Lady Gaga’s ‘Paparazzi’ at a sixth-grade music festival went viral on YouTube, gaining widespread attention and over 55 million views. This led to an appearance on The Ellen DeGeneres Show, global stardom and the release of his record-breaking debut album “Hold On ‘Til The Night.’

In addition to Greyson Chance, more acts will be announced soon. Stay tuned!

Keep a look out on our Facebook Page for more cool giveaways, like a chance to meet and greet with the performing artistes!

Our official radio station, Mediacorp’s 98.7FM will also be doing some really exciting activities and giveaways so remember to tune in and get involved!

How to get in?
It’s simple! Spend $90 at myVillage for 1 invite, or $160 for 2 invites. Then, collate receipts and take them to the Concierge Counter. Tickets are very limited due to space constraints, so get them quick!

Redemption will be at myVillage, Level 2 at Concierge Counter
Only on Tuesdays to Sundays, from 12pm to 8pm

Terms & Conditions:
– Receipts to be accumulated within 9 days.
– Maximum redemption of 2 tickets per person.
– Up to 5 combined receipts for each redemption.
– NTUC Finest Supermarket Receipts not valid for this redemption.
– Name, NRIC, mobile and email address to be provided before tickets can be obtained.
– Tickets available while stocks last.
– NETS receipts are not valid. Only original tenant receipts are accepted.
– Tenants, employees of tenants and employees of myVillage are no eligible for this redemption.
– myVillage at Serangoon Garden reserves the right to amend the terms & conditions of this promotion at any time.

See you there!
– Hugh